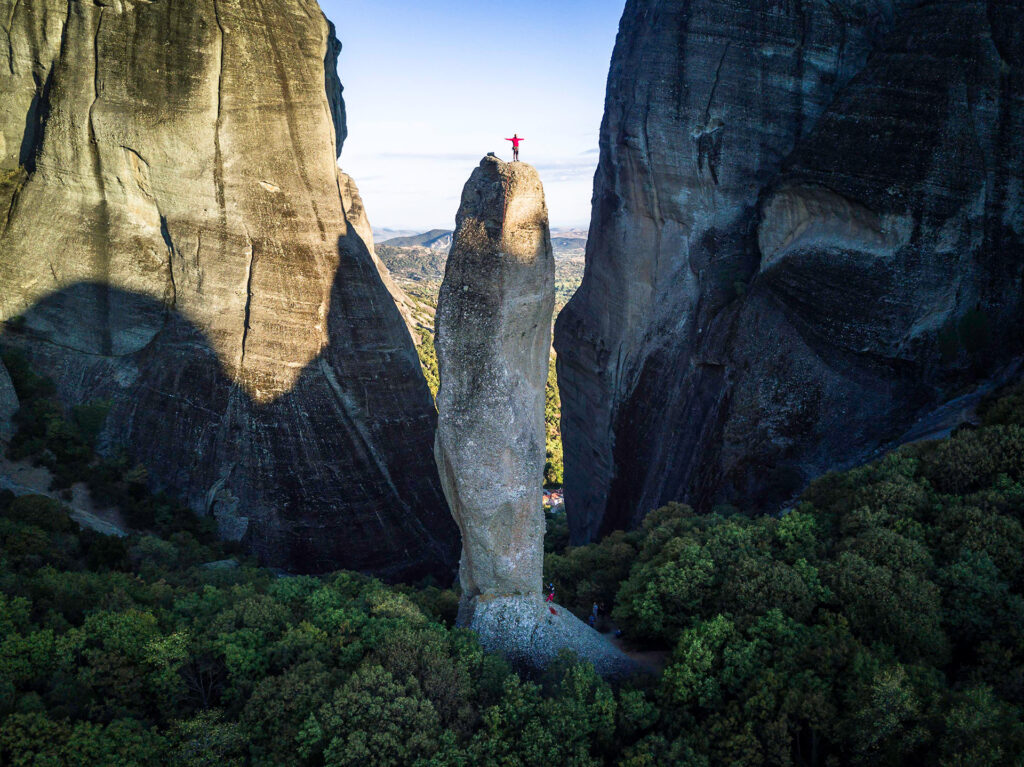 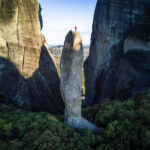 Engage in Adventures and Outdoor Activities

Meteora creates the perfect setup for people to engage in awesome adventures and outdoor activities! It’s like being on another planet, light years away from the average scenery of other places around the world. Whether alone or with a family, Meteora offers a wide selection of various outdoor activities and soft adventures to choose from. The entire area is a World Heritage Site made of huge sandstone rock pillars with ancient monasteries perched on top.

Following the words of an author of a local guide, “the slow pace of the walker gives him the chance to experience the surrounding world, where a flower, a rock or a monk standing on a high balcony are perceived quite differently. Only by following the footsteps of holy men as far in the past as the 11th century – well away from the milling crowds of tourists – is one able to experience a different aspect of Meteora”.

The sheer blocks of rock may look intimidating, but in reality, walking around the area is not a difficult task. Walking is the only way to observe impressive rock formations and the shaping of strange patterns from a closer distance. Choose a pathway, like the one starting from the old town of Kalabaka towards the monastery of Holy Trinity. Or the one leading you to discover the ruins of Badovas near Kastraki village. Avoid the big crowds, choose your path wisely, a pair of good trainers and a camera it is all you need for an unforgettable experience and a Meteora adventure! 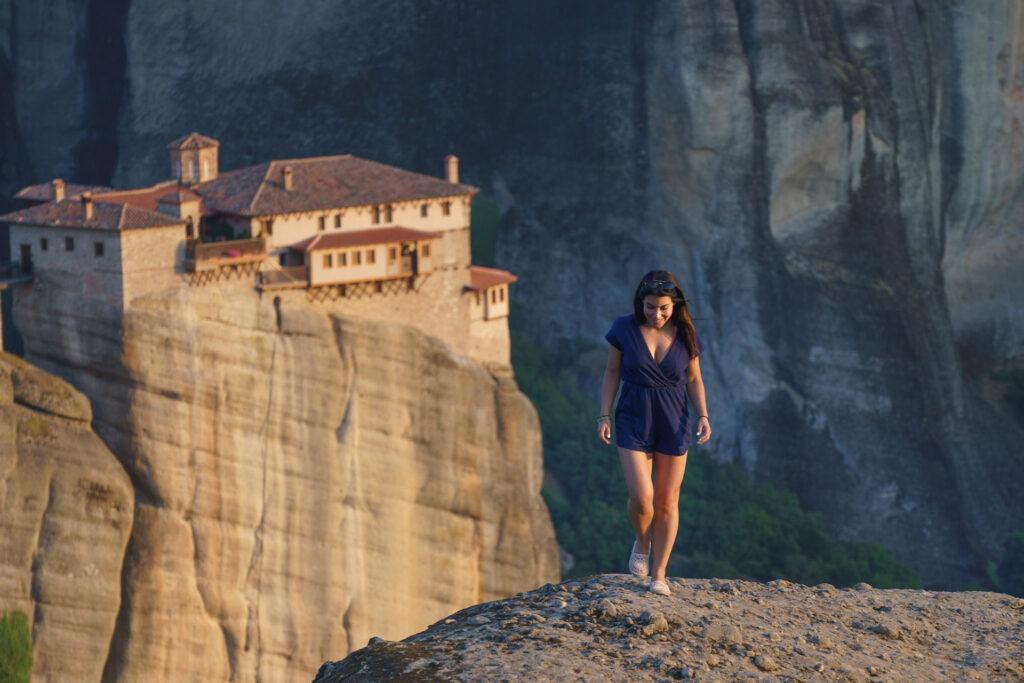 As most paths remain unmapped and, unfortunately, poorly marked, we wouldn’t like to see visitors discouraged or lost! For that reason, we believe that you should take advantage of our local guides, who will be your enthusiastic leaders and hosts in such ventures. Check out our recommended hiking tours and share your adventure with a local guide!

The first people to have climbed up the rocks were the shepherds who sought protection for their sheep. Consequently, the first individual monks found shelter and spiritual isolation in their caves. In 1958 a tobacco advertisement caught the eye of Dietrich Hasse, a German physicist and alpine climber, who was intrigued by the stunning rocks used as the advertisement’s background.

Upon his visit to Meteora in 1975 in the company of the photographer Heinz Lothaz Stutte and other German climbers, he found out that he would become the first professional climber on the rocks. Along with his fellow climbers, they reached the peaks of all rocks except the ones with monasteries on top. Small notebooks inside metal boxes were placed on the peaks of all rocks where the achievements of the first climbers were recorded, including the sketching of all major routes. 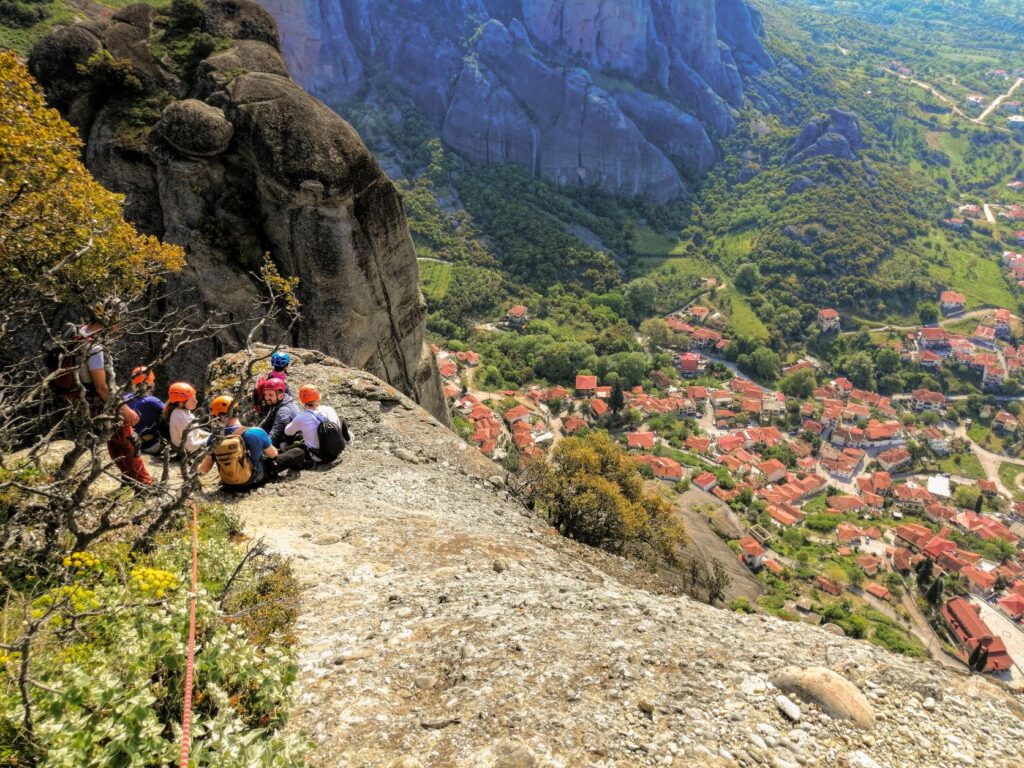 Following this tradition, successive climbers have ever since been recording their names and the dates of their climbing missions. But you don’t even have to be a rock climber to reach the highest picks of Meteora. What you mostly need is the will to join a Meteora adventure,  the courage to conquer the fear of heights, reasonable fitness to hike the steep slopes, and the local guides who know the hidden trails! This is all it would take to conquer the Great Saint and reach some 400 meters above the town of Kalabaka. If you dare that is…

Most Greek climbers show up in the area around Easter time to have their dose of Meteora adventure. However, Mediterranean weather allows for two major climbing seasons which are most popular; from April till June and from September till November (always depending on weather conditions). 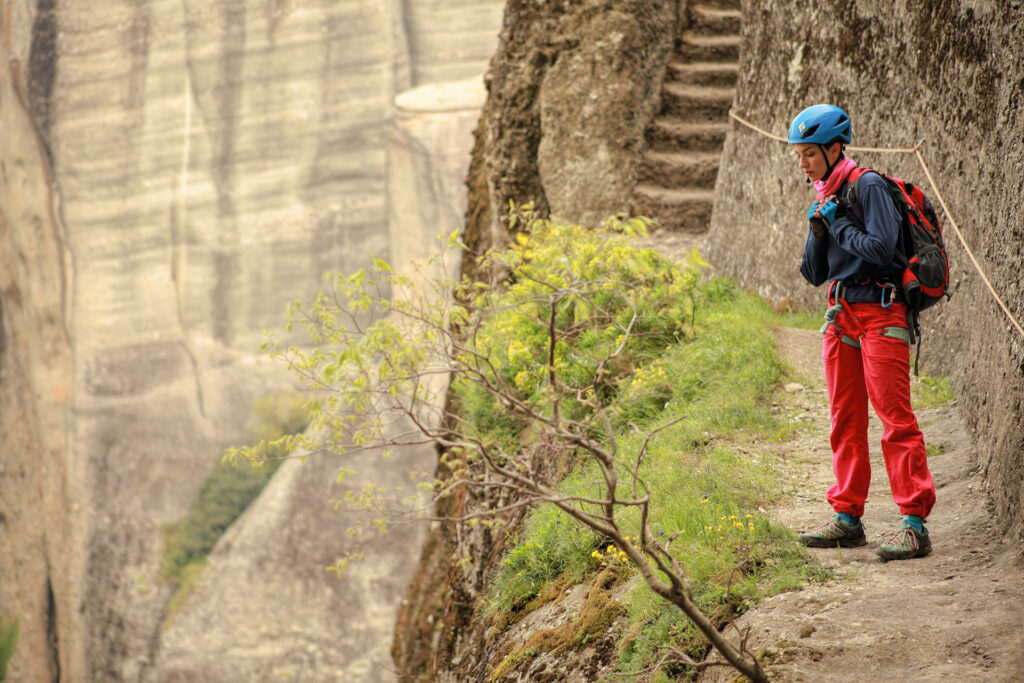 In the summertime, you could always choose climbing routes in the most shaded rocks. To avoid the heat, the northern and western parts of the rocks are usually ideal from 5 am until 11 am and from 4 pm until 8 pm, around sunset time. Double-checking the weather forecast will always save you from the trouble! Finally, please bear in mind that there are no climbing routes to the rocks where monasteries exist. Following an agreement between the local monks and the first climbers, for respecting the privacy of the monastic community, rock climbing on cliffs with monasteries is totally forbidden.

Are you ready for your dose of adrenaline rush? Join an unforgettable Meteora Adventure… 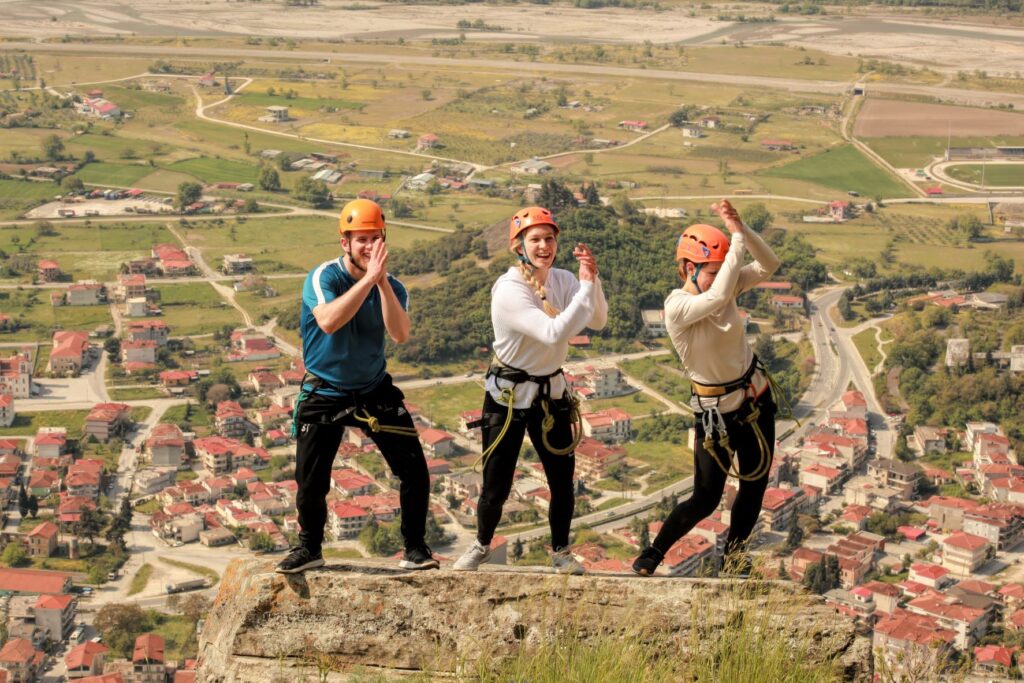 Hi, I would like to combine a trip with my son (13.5 years old) and I, for a field trip and combine climbing cliffs with ropes. On 14.7 in Meteora, I would love to receive suggestions