Home Historical Ancient Meteora in the Dawn of History 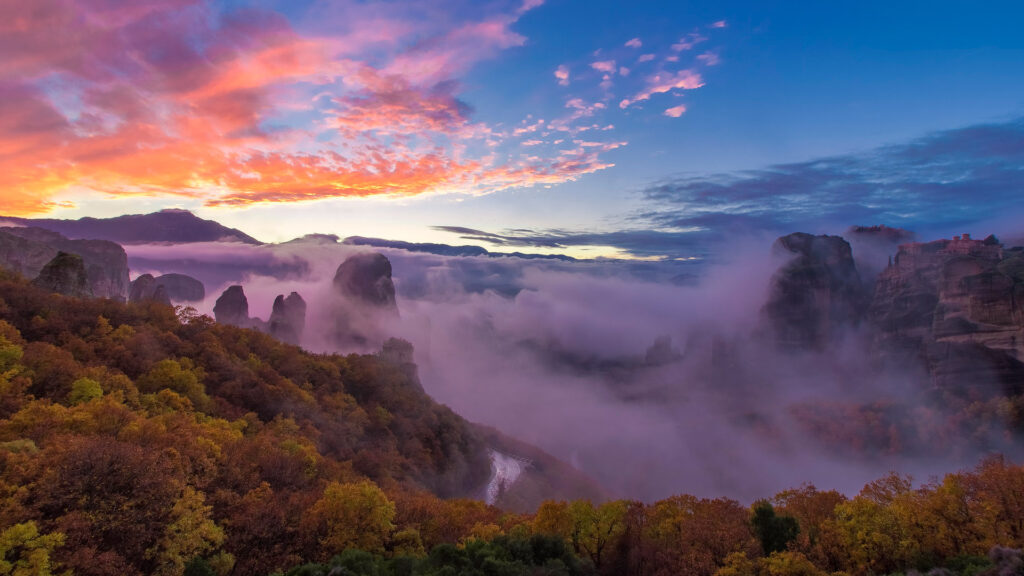 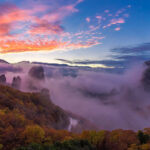 Meteora in the prehistoric period

Peneus River that runs on the outskirts of Kalabaka town, has been the basis of all elements which relate to the history, civilization, economy and the development of the life of Thessalian history. This is the reason why most of the earliest remains of a human presence here have been discovered near the banks of this river. According to the latest archeological findings, man’s presence in the region starts at the Mid-Paleolithic era, about 130.000 years ago. In recent years important artifacts, as well as human remains, have been discovered at Theopetra cavern, where very significant excavations are being held continuously over the last 25 years. The last glacial period of the Paleolithic era slowly started to retreat, and the climate slowly began to warm at around 16000 years ago.

This prehistoric climate change lasted for another 5000 years, culminating with the Younger Dryas catastrophe ~12.000 years ago, and the mass extinction of the megafauna at the ending of the Pleistocene. By the time the climate became stable again, the early waves of the agricultural revolution had already swept through the fertile plain of Thessaly! The domestication of animals soon followed, less than a thousand years later! It’s fascinating that very few places on Earth outside Mesopotamia can yield with such consistency on the archeological findings the successive evolutionary stages of the agricultural revolution. The region of Thessaly is indeed one of those rare regions around the world! Meteora visitors today can see the prehistoric findings of all these in the small museum of Theopetra. The museum exhibits Meteora’s prehistoric artifacts as well as burials found in Theopetra cave.

Neolithic period and the first seeds of civilization

Last year Greek scientists were able to complete the facial reconstruction of a woman that lived and died almost 10.000 years ago, during the Mesolithic period and was buried in Theopetra cave. The lady was named by Greek scientists “Avgi”, meaning the “Dawn” and became world-famous when she was featured on a National Geographic magazine article this year. This “boom” of Thessaly’s Neolithic economy was marked by mass population movements and the creation of the first permanent settlements, like Sesklo and Dimini mainly on the Eastern part of Thessaly, next to the Aegean Sea. Sesklo enjoyed its heyday around 5500 BC. The community covered an area of more than 13 hectares and its population could not have been more than a few hundred inhabitants. The buildings at Sesklo had stone foundations and a “superstructure of pisé”, crowned by a gable of a hip roof made of a thick layer of clay on a timber frame.” Most of them where one-roomed measuring between10 to 50 square meters.

Dimini covers an area of 0.8 hectares and the astonishing fact about this site is the six concentric circular enclosures. Initially, it was thought that represented defensive walls but recent reexamination points to the better organization of the land. Dimini was established sometime after 5000 BC and its buildings are within the concentric circles mentioned above. In that same period, Thessaly was known by the name of Pelasgia and its Neolithic inhabitants as Pelasgians. During the early 20th century, archaeological excavations conducted by the Italian Archaeological School and by the American Classical School on the Athenian Acropolis and on other sites within Attica revealed Neolithic dwellings, tools, pottery and skeletons from domesticated animals (i.e., sheep, fish). All of these discoveries showed significant resemblances to the Neolithic discoveries made on the Thessalian acropolises of Sesklo and Dimini. These discoveries help provide physical confirmation of the literary tradition in the Greek mythology that describes the ancient Athenians as the descendants of a Pelasgian tribe called “Lapithes”, who appear to descend continuously from the Neolithic inhabitants of Thessaly.

A few thousand years later at around 1300 BC during the Mycenaean period in Thessaly region, known at that time by the name of Aeolia, a considerable number of bigger in size settlements were developed. Those bronze age settlements became strong enough to allow their participation in the Greek campaign to conquer Troy, as mentioned in Homer’s Iliad. In fact, Thessalians of that period ranked among the strongest and wealthiest of bronze age Greeks; the most prominent among Thessalians being Achilles and his fellow warriors the famous Myrmidons. This is the Age of heroes or the heroic period. The wealthy nobles of that period who were able to afford the expensive armor made mainly of bronze would become known for their bravery. In the battlefields of that period, there is not yet a phalanx to fight within its ranks as a cohesive unit, only the warrior as a single fighting entity. Distinguished by his bravery, his armament, and his personal fighting skills. Achilles, a great hero and a warrior from the epic of Iliad in the Homeric period but also later he was the archetypical ideal of a warrior hero during the Mycenaen times!

Later periods of our ancient history and the Roman conquest

The cities mentioned by Homer located around the region of Meteora were Trikki (present today Trikala) Oechaliae and Ithomi (most likely present-day Kalabaka). Ruled at that time by Asclepios, a demi-god and the son of god Apollo. He became famous for his medical skills and he was worshiped later on by Greeks as the god protector of medicine in temples called “Asclepeion”. According to 1st-century geographer Strabo, the most famous Asclepeion was in ancient Trikki, modern-day Trikala. Those 3 Thessalian cities around Meteora region; mentioned by Homer in his catalog with all the participants in the expedition, formed at a much later period under the name of Estiaeotis one of the four administrative states of the Thessalian confederation. The Thessalian confederation lasted until 353 BC when in the aftermath of the Macedonian victory in the battle of Crocus Field of King Phillip II against the Phocians, the Thessalians appointed King Philip “Archon” of Thessaly. This was an appointment for life and gave Philip, the father of Alexander the Great, control over all the revenues of the Thessalian Confederation. Furthermore, this made King Philip the leader of the United Thessalian army!

The Thessalian cavalry of the Hellenistic period of 16.000 horsemen was highly regarded by the rest of Greeks for its combat effectiveness. During the early Hellenistic times, Alexander the Great used it in numerous battles mainly against the Persian Empire. From that point on Thessaly became one of the closest allies of Macedonian dynasties (1) and they remained so until the invasion of Romans, during the early 2nd century BC and the battle of Cynoscephalae in 197 BC. The ancient town of Kalabaka, known at that time by the name Aiginion, stayed loyal to the Macedonian dynasties till the very end, resisting twice to the Roman conquest of Greece. A few years after 168 BC, the year when the ancient town of Kalabaka was sucked by the Romans, Thessaly was finally annexed by the Roman Empire and with Macedonia, it became a Roman province for centuries to follow.

(1) An important clarification I’d like to make is in relation to the Former Yugoslav Republic of Macedonia, formally recognized today as “North Macedonia” and its fake connection to ancient Greek Macedonia. This modern state situated on the northern borders of Greece, roughly occupies today what in the ancient times was known as the land of Paeonia. The citizens of that state today are a mixture of many different ethnicities, mainly Slavs, Serbs and Bulgarians, Albanians and a few others. None of which of course ties historically, ethnologically or culturally to ancient Macedonia; a Greek kingdom the south borders of which were reaching 20km north of Meteora.