Home Cultural Meteora beauty: Meditating on the awe of creation and life. 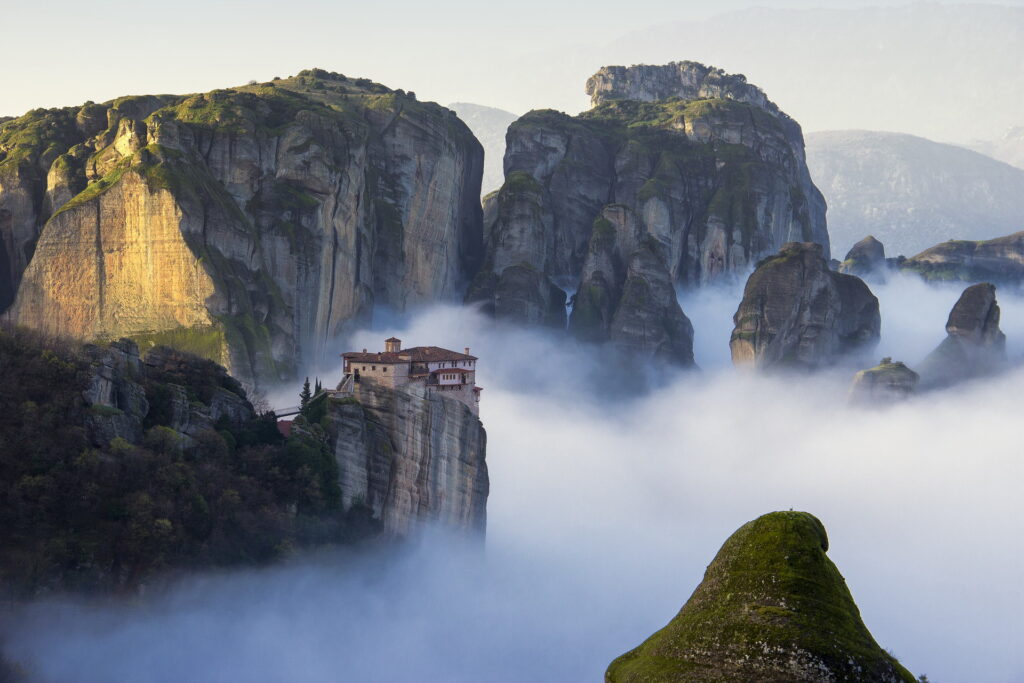 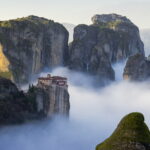 15 to 16 years have passed since I asked my first questions as a kid regarding those very first hermits and monks that came here to Meteora so long ago.

-Why did they choose this place?

-What made them climb up there and build all these monasteries?

I still remember very vividly that those questions were answered in one of the usually hot and very dry summers of Greece. During those early years, each summer I spent as a small kid it truly felt like I had just lived a whole eternity. I don’t want to say that winter was passing faster than summer, on the contrary. All I am saying is that when we were kids, summer compared to winter felt more like our 3 months in the Garden of Eden. We had the opportunity to be outside all day, to play with friends and to explore. So brand new, so rich and joyful are almost everything around us when we are kids. And each passing day fills you up so much with life’s excitements and its experiences it almost makes time to slow down. This is how I remember it being a kid…

As an adult, from time to time I bring back few of those memories of the “time-bending” summers and the associated experiences, and cannot help myself thinking that if we were to remain kids in our hearts throughout all our adult lives, then by the age of 60 or 70, I am pretty sure we would all feel that we have lived not just 60 or 70 but more like 2000 years. By the time we would reach the age of 80 I can only imagine how more wise we might have looked and act. Probably wiser and fairer even compared to Tolkien’s mythical figures of the Great Elves. And then perhaps even the very notion of death would probably have to take a whole different meaning.

But like everything else in life I was growing. And with each passing summer, in the end, it felt it had lasted less than the previous one. Unsettled, rebellious and full of questions, it was right on the middle of this transitional period of mine when a traveler from the United States introduced me to a recently published and very interesting book.

The book was titled the Celestine Prophecy, a 1993 novel by James Redfield. And although my native language is Greek, I did manage to read the whole book despite it was written in English! To give a short synopsis of the book for those who haven’t read it, the story begins with a restless, disgruntled social worker who can’t figure out what’s wrong in his life. When an old friend calls him out of the blue, she intrigues him with the story of an ancient manuscript that has been found in Peru.

The manuscript contains all the secrets of life but is being suppressed by the Peruvian government. The book’s main character is so swept up by the things told by his friend, that immediately he books a flight for Peru, to go in search of the document that can tell him the meaning of life.

Once in Peru, he tries to avoid the hostile and misguided Peruvian officials who want to arrest him, finding bits and pieces of the 9 insights that the manuscript reveals. As the story progresses our hero becomes wiser, learning step by step the hidden mysteries of life which all mankind is destined to ultimately grasp. But most importantly he understands that all life’s coincidences are meant for a purpose, created by universal energy for the unfolding of man’s spiritual evolution. The book refers to those accurately timed coincidences as “synchronicities”. Our hero learns to draw on the universal source of energy, and thus be freed from the need of dominating others to steal their energy. He glimpses his oneness with the universe, and how to increase his energy by meditating on its beauty.

And there it was! Upon finishing the book I had my very own version of an insight that answered many of my questions regarding the true deeper motives of those early hermits in establishing a monastic life in Meteora! Those hermits and monks that settled in our area over millennia ago didn’t just do it only to get isolated from the rest of the world. They were all pulled here mostly by the energy, the beauty and the awe-inspiring landscape. Such unique landscapes like Meteora are like energy wells from which anyone that wishes can tap into them and “drink” pure energy for free.

Did those monks and the hermits had any intimate knowledge of any sort of insights like those mentioned in the book? Most probably they didn’t. What I believe they had was an unconscious feeling, a deeper impulse that the beauty and the serenity of the place somehow make it easier for them to attain the inner peace they seek in their lives. Only by gazing and enjoying the majestic landscape of Meteora every day throughout their lives, it was an act of meditating on the awe and beauty of all creation. As if the landscape itself becomes a constant reminder for our inner selves to stay in our hearts eternal kids, full of life and excitement in every step we make, in each breath we take, whatever we gaze upon and admire.

Thank you. I will be there in April and can’t wait to experience the monasteries