The return of the Neophrons

Home Adventure The return of the Neophrons 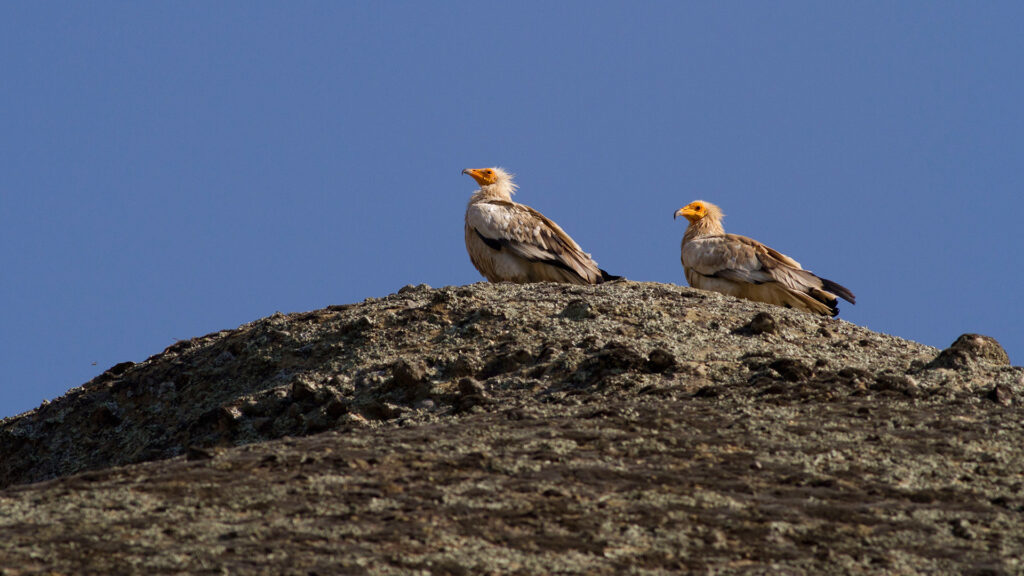 The return of the Neophrons 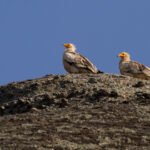 Most of the locals remember the times when large birds of prey flew graciously among the high tops of the rocks here in Meteora. Eagles, vultures, hawks and other majestic birds of prey dwelled in large numbers the steep slopes and the high rocks of Meteora.

People of some age even today they tell stories of giant vultures strong enough to lift a small-sized sheep or goat. And then, like anywhere else on this planet progress and the hand of man came together and changed everything in their path. 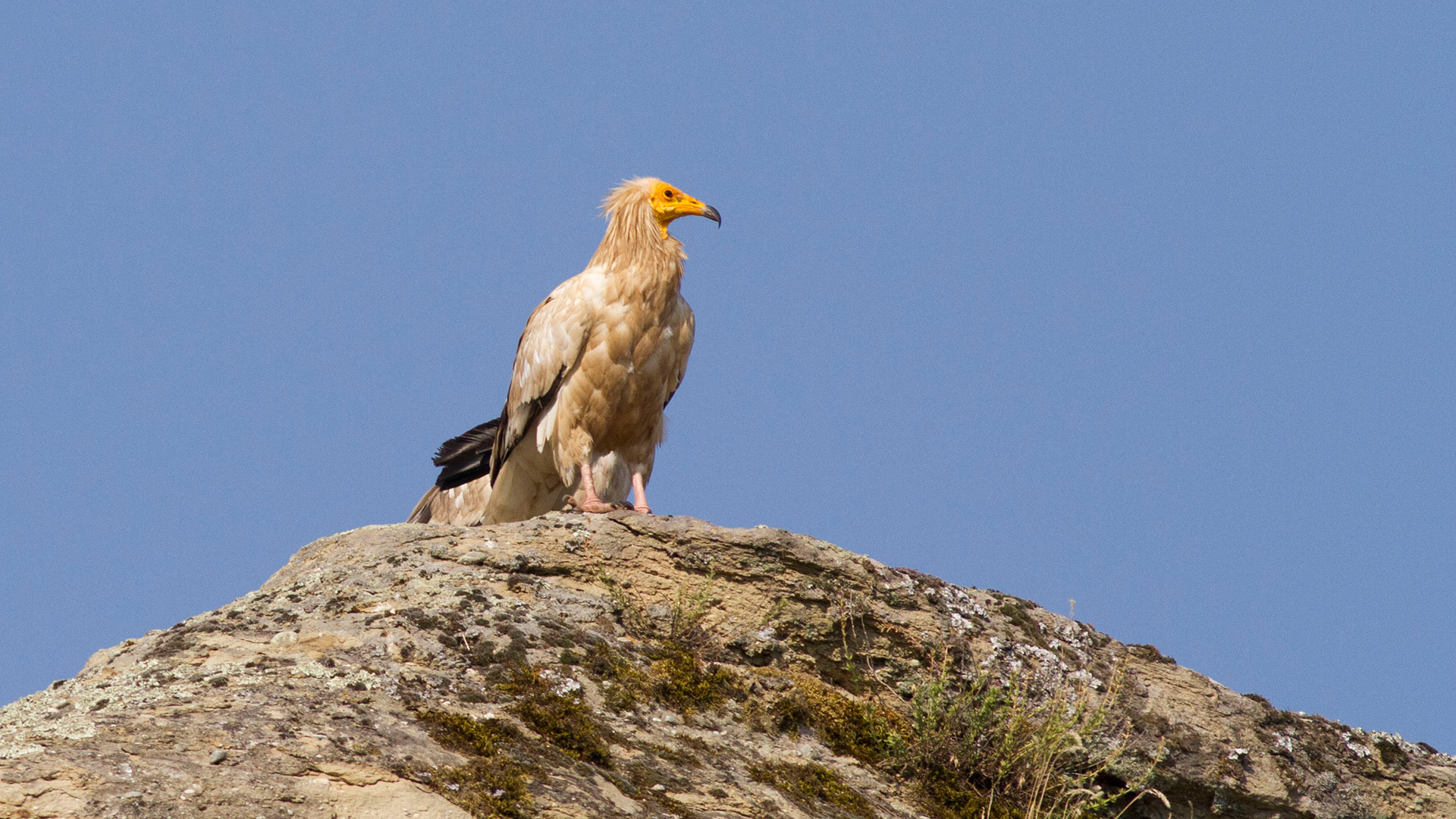 The once small agricultural settlements of Kalampaka and Kastraki grew up remarkably fast; the small primitive farms and livestock diminished, roads were built, cars, houses, tourists, electricity and light pollution came and forever changed the landscape, totally transforming birds habitat. Nature’s balance was lost and with it, we‘ve almost lost from sight the magnificent birds of prey of Meteora.

One of the many vulture species that used to live here in considerable numbers was the Egyptian vulture, scientifically known as “Neophron percnopterus”, which is the smallest of the four species of European vultures. Only a handful of pairs still remain in the general area of Meteora and the Antichasia mountains. It’s small size with a wingspan of 180 cm (5.9 ft.) and body length of 60 cm (2.2 ft.) have led to its other Bulgarian name: ‘lesser vulture’.
The adults have white plumage with black flight feathers and featherless yellow-orange face. The crest of white, pointed feathers gives the bird its typical appearance. The tail is white and wedge-shaped. The bird reaches adult plumage in its fifth or sixth year. 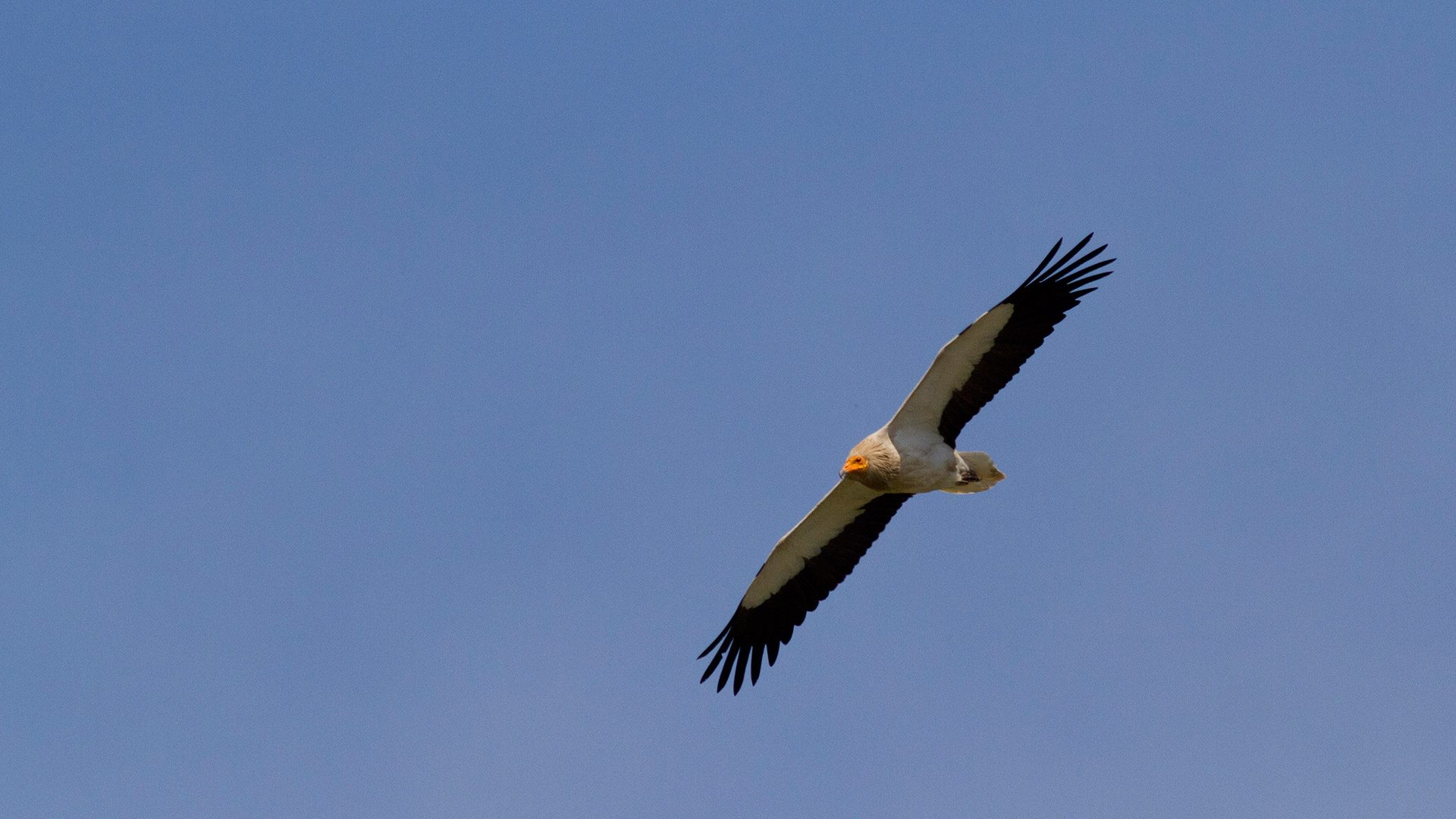 The Egyptian vulture is a globally endangered species, included in the Red List as “Endangered”. Its global population estimated between 30.000 to 60.000 individuals with a steady negative tendency. It is strictly protected by the Bern and Bon International Conventions, as well as by the Convention on International Trade in Endangered Species (CITES). In the past, the Egyptian vulture was wide-spread throughout Bulgaria and Greece with high population numbers. Today the Balkan Peninsula is home to less than 90 pairs. This endangered bird species are included in the Bulgarian Red List and protected under the Biodiversity Act.

This particular vulture prefers open hills and low mountain ranges. Its main nesting sites are cliffs and rocky slopes, often close to human settlements. The nest locates in niches, ledges and crevices in the cliff face. One nest is usually occupied for several years. The species is monogamous; in Ancient Egypt, it was revered as a symbol of parental care.

Neophron vulture is a migrant. In September, both young and adults fly south to spend the winter months in Africa. In the spring, they fly over thousands of kilometers back to their nesting territories. As soon as the pairs arrive in March-April both birds start improving the nest. First they build or strengthen the base by entwining twigs and branches; then they meticulously cover the interior with wool and rags. In the end, the nest is decorated with bones, tortoise shells and other leftovers from their diet. In April-May, the female lays 1-3 eggs. Both parents sit on the eggs.

The Egyptian vulture, as other vultures, feeds mainly on carrion. Therefore, the vulture family is known as ‘nature’s caretakers’. The Egyptian’s diet also includes insects, larvae, frogs, lizards and tortoises which it catches them alive. It can be seen patrolling the roads in search of roadkill. It also frequents local dumpsites. The bird is well-known for its intelligence – it is among the few bird species in the world to use tools. In Africa, the vulture can often be seen breaking abandoned ostrich eggs using a stone. 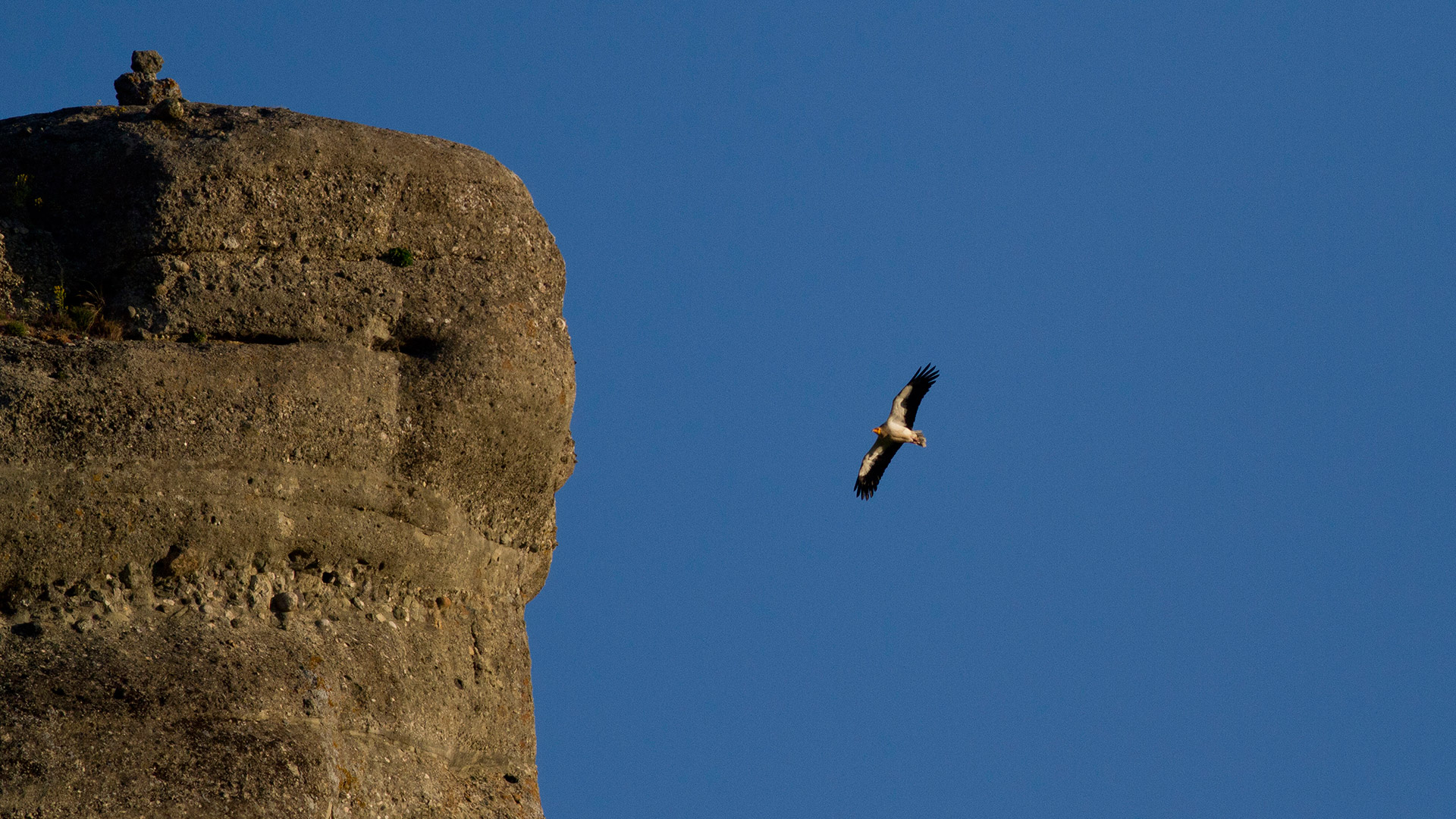 In September, both young and adult birds leave the nesting territories of the species and start a long journey towards their wintering places in Africa. They migrate in small groups, mainly over land, avoiding long distances over the open sea, although some individuals from the southwestern Balkan population regularly cross the Mediterranean Sea. They fly over Turkey and the eastern shores of the Mediterranean to rich African land. Along the migration routes, they gather in large numbers at places with an abundance of food such as dumpsites and feeding stations.

In order to help this endangered bird species an international collaborated project initiated between the Bulgarian Society for the Protection of Birds (BSPB), the Hellenic Ornithological Society (HOS), the World Wildlife Fund-Greece (WWF), and the Royal Society for the Protection of Birds (RSPB). The project’s main scope is the identification of all confirmed threats Egyptian vultures are facing and contribute to the long-term decline of these endangered species, as well as the appropriate actions that need to be taken in order to reverse this ominous trend and thus ensure their long term survival.

We can only hope for the complete success of this project and with everyone’s help and active involvement to save these endangered birds from total extinction. For the coming generations to be able also to admire these giants of the air as they fly between the high rocks and the high mountain tops.