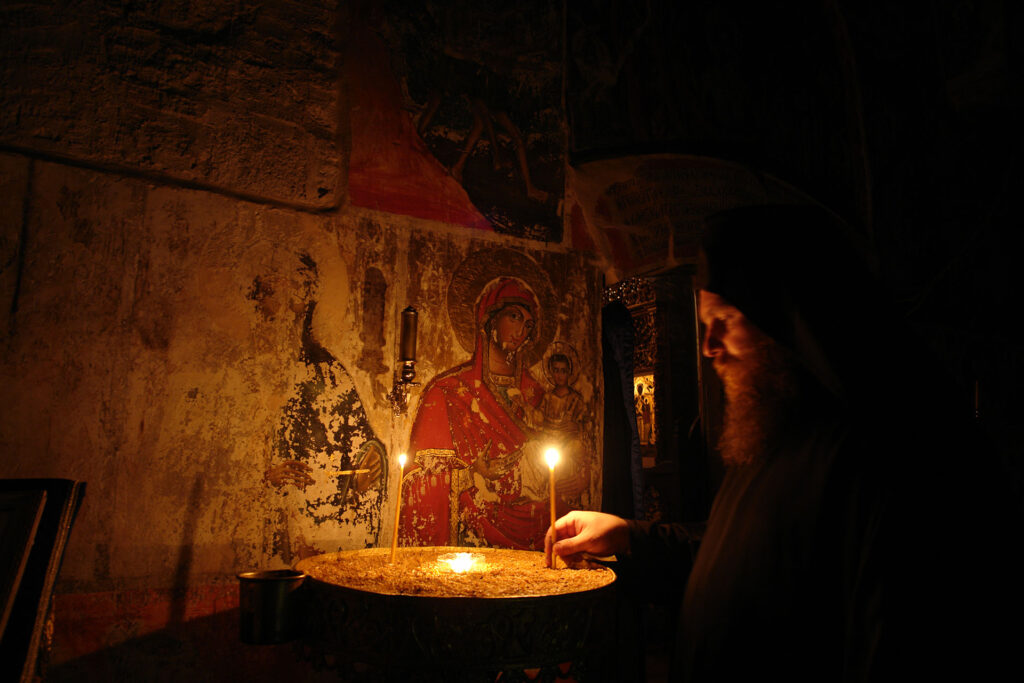 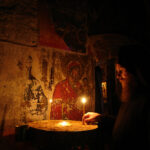 The monks of Meteora

Meteora it’s a place of central mainland Greece with immense rock formations, some of them rise 400 meters above the ground. They seem like they remain suspended between heaven and earth! For the past 1000 years, Meteora gave shelter to those who wished to retreat from this earthly world and to form a Christian monastic community that at its pick had over 24 monasteries. Today, only six of them remain active, perched on the massive cliffs and at present is the second most important monastic center of the Eastern Orthodox church after Athos. Meteora it’s not just a natural wonder or an archeological site for tourists to visit. Nor is yet another Instagrammable place for pictures to share. Meteora above all it’s a spiritual site! An official holy place of Greece and of Christianity that still has to this day an active, centuries-old monastic life.

If you don’t have a clue about the Orthodox Church or its monastic tradition, below you can find some key facts and answers (A) to questions (Q) about the monastic life within Orthodox Christianity.

(Q): What is the Orthodox Church?

(A): The Eastern Orthodox Church, also known as the Orthodox Church, is the second-largest Christian Church, with over 250 million members. Some will even address this church as the historical church because the succession of its bishops goes all the way back to the Apostles. As one of the oldest religious institutions in the world, it has played a prominent role in the history and culture of Eastern Europe, and the Near East, including Slav and Greek peoples. Eastern Orthodoxy developed in the Greek-speaking Eastern part of the Roman Empire, which is known today by the name of Byzantine Empire. During the first centuries AD, most major intellectual, cultural, and social developments in the Great Christian Church took place within the sphere of influence of the Byzantine commonwealth, where the Greek language was widely spoken and used for theological writings. In reference to this legacy, it was sometimes called “Greek Orthodox”.

(Q): What is Christian monasticism?

(A): Christian monasticism is the devotional practice of individuals who live ascetic and typically cloistered lives that are dedicated to Christian worship. It began to develop very early in the history of the Christian Church, modeled upon scriptural examples and ideals, including those in the Old Testament, but not mandated as an institution in the scriptures. It has come to be regulated by religious rules and, in modern times, the Canon law of the respective Christian denominations that have forms of monastic living. Those living the monastic life are known by the generic terms monks (men) and nuns (women). The word monk originated from the Greek monachos “monk”, itself from monos meaning “alone”. There are monasteries for men (monks) or monasteries for women (nuns) solely. So, the Christian monks and the nuns they’ll never mix to live together within each monastery.

(Q): Can the monks or the nuns make families? Can they marry?

(A): The answer to that is simply No! Christian Orthodox monks and nuns will remain without wives or husbands for the rest of their lives. The Orthodox priests though they can make families if they find a wife before they’ll become priests.

(Q): Are there many different types of monasticism?

(A): Within Orthodox monasticism there are no religious orders as in the West and the Roman Catholic Church, so there are no formal Monastic Rules rather, each monk and nun is encouraged to read all of the Holy Fathers and emulate their virtues. Within the Eastern Orthodox Church, exist three types of monasticism: eremitic, cenobitic, and the skete. The eremitic or the so-called hermit-like (Greek word eremos; meaning the dessert) is a name derived from the first Dessert Fathers who withdraw from society to live in isolation in the deserts of Egypt during the 3rd century AD. The first recorder Dessert Father was St. Antony from Egypt. The skete is a very small community, often of two or three, under the direction of an Elder. They pray privately for most of the week, then come together on Sundays and Feast Days for communal prayer, thus combining aspects of both eremitic and coenobitic monasticism. The cenobitic or community-based monastic life, where the monks or the nuns live in individual rooms or cells but work, eat, and worship in shared space within a well-organized compound called the monastery.

(Q): What types of monasticism exist in Meteora?

(A): Interestingly enough here at Meteora and for the past 1000 years all 3 types of monastic life mentioned above were present here. Today we have monks and nuns who practice still the cenobitic and skete types. At a place called by the locals Badovas, hidden between the giant rocks one can still see the evidence of these 3 types coexisting in the ruins of the last hermit, the skete of St. Antony and the small monastery of St. Nikolas of Badovas.

(Q): How the monks earn their living?

(A): The monks and the nuns even to this day, they’ll have to work hard to earn their living. Hard labor is still an integral part of the monastic way of life. The brotherhoods in each monastery they’ll all have to share the workload among them and each monk will contribute according to his skills to produce goods they need or to sell and to maintain the monastery’s property. The monastery will have to become self-sufficient as much as possible. Another important source of income is donations they’ll receive from pilgrims. Pilgrims donate money, goods, and services, property, all sorts of things that monks need to support their lives in the monasteries. A lot of the monasteries after centuries of receiving donations of land have become today among the bigger landowners. During the past, the exploitation of the monastic land or any other property they posed, constituted one of the main sources of income for the monks. The monks are unable to sell any of the monastic property, but they can financially exploit it through other means like, for example, to lease it for a specific period. The main source of income for the monasteries of Meteora today is the 3 euros entrance fees visitors pay on the entrances of monasteries.

(Q): What are the main differences between the Roman Catholic and the Greek Orthodox church?

(A): The 2 churches used to be the one single Catholic Church, but in the year 1054 AD amid growing disputes and differences accumulating for centuries between them the “Great Schism” takes place. The biggest and most fundamental difference though of the 2 churches is a cultural difference that permeated the Roman empire since the beginning of Christianity. In the Western part of the Roman world, the dominant language and culture were Latin, while in the East people endorsed mostly the Greek language and culture. This cultural difference became even more apparent during the Dark Ages and the isolation of the West from the Greek-speaking world in the East that followed. Centuries of divergence and development of the two Christian regions under totally different conditions eventually led to the “Great Schism” of Christianity in 1054 AD and the formation of the Roman Catholic Church under the rule of Pope in the West, and the Greek Orthodox in the East. To this day the Greek Orthodox Church doesn’t recognize the Pope as the supreme leader of Christianity and perceives the Roman Catholic church as a schismatic church.