The Minyans: The story behind the myth (Part 2)

Home Historical The Minyans: The story behind the myth (Part 2) 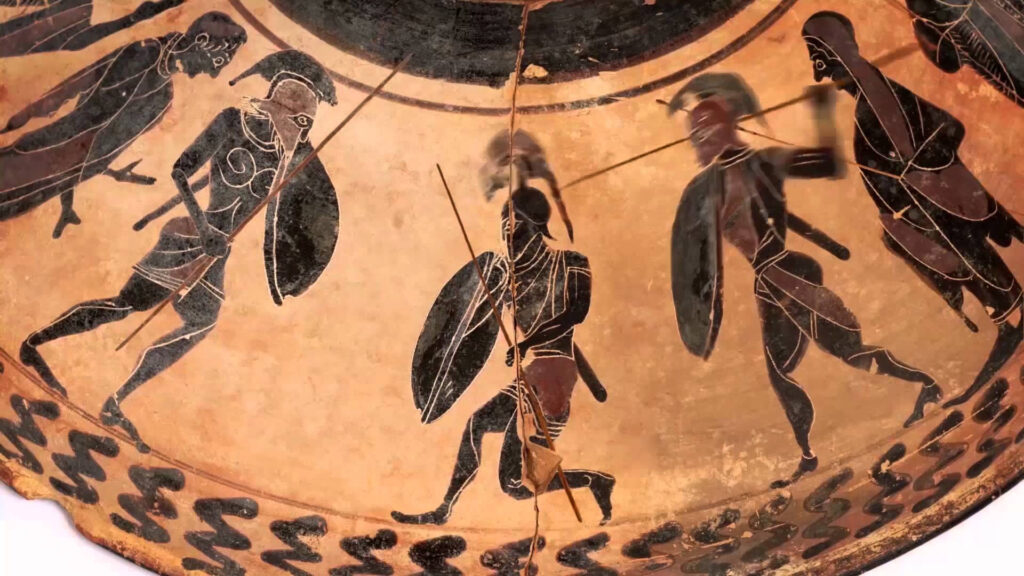 The Minyans: The story behind the myth (Part 2) 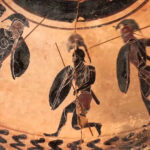 In this second part, we attempt to investigate any connections of the pro-Greeks Minyans to Meteora and the possibility of incredible ancient engineering feats lurking hidden right under our noses. In the first part, we investigated the massive engineering project that these prehistoric people undertook in Lake Kopais, at a period when the established view of our history presumes that no form of writing existed in Greece. A faint memory of them maybe has survived in the local legends and myths of Meteora. We will try to piece together the scattered pieces, clues, and hints concealed by the thick mist of time.

The Minyans of Thessaly

So, who are those ancient people called Minyans, who had those exceptional technical skills, the will, and the resources to undertake such a massive project in the dawn of Greek civilization? Very few things are actually known for the mysterious ancient kingdom of Minyans and the historical sources mentioning them are very scarce. According to mythology, their first known king was Minyas (2) who lived in the ancient city of “Almonia” of Thessaly. Some speculate that Almonia, later on, was renamed to Iolklos, the city from which Jason launched the expedition of the Argonauts. Minyas, apart from being the first known King, was also the primogenitor of them.

The myth says that King Minyas was wise and a pacifist and he cared much for the welfare of his people. He firmly believed that people can progress through better education and the spread of knowledge. So he became one of the first rulers in history to organize a state-funded educational system for his people. And the land of Minyans thrived and they became a seafaring nation of great explores and skillful engineers who left behind some of the greatest engineering achievements of the ancient world. The tholos tomb of king Minyas is yet another impressive engineering achievement, one of the largest and most important monuments of its kind. The boulder placed at the top of the gate visible in the picture below weights more than 120 tons! 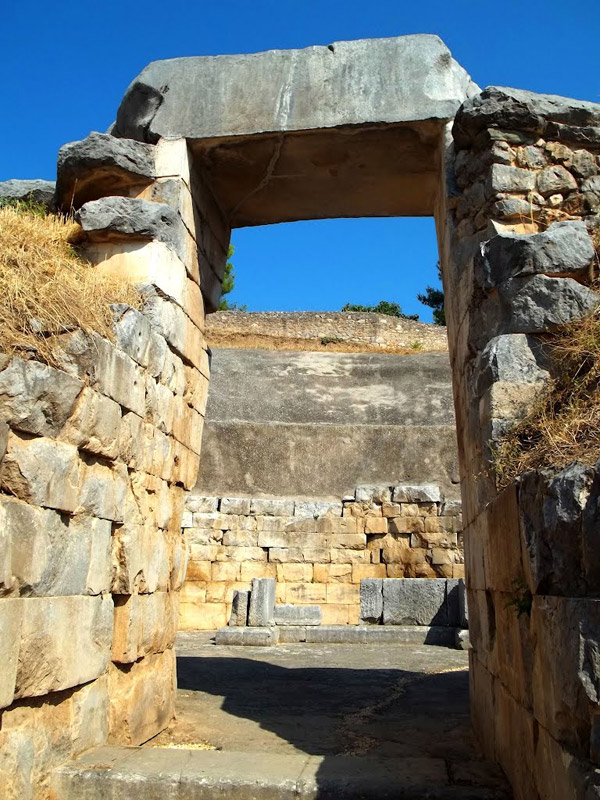 The myth says that after a great flood that happened in Thessaly some of the Minyans migrated south to an area years later it became known by the name “Orchomenos” and there they peacefully settled on a hill called “Ifantios”.

“They came in peace, men, women, and children all riding horses and dressed in the finest clothes as if they were going to celebrate and their leader was called Andreus, the son of Peneus.”

Pausanias tells us that Orchomenos was built in the district of Andreis, called after the first settler, Andreus, son of the river god Peneus. (Pau.9.34.6). It is also known that around 2,200 BC Minyans colonized Piraeus and there among other things they also build underground facilities that later some of them were used for the worship of god Asclepius. Minyans originating from Thessaly by the end of the 3rd millennia BC had colonized and controlled most parts of Greece as well as many of the Aegean islands.

There is a rumor circulating among the local people of Meteora that underneath the Byzantine church of “Virgin Mary”, there are catacombs and tunnels! It’s interesting to mention that the church was built either in the 4th or 5th century AD on top of the ruins of an old Apollo temple. The locals are insisting to this day that the tunnels continue for many miles to the south reaching the citadel of ancient Trikki or Trikka (modern-day Trikala) some 20km away from the town of Kalampaka! The city of Trikki first mentioned by Homer in the book of Iliad:

“From Trikka, and Ithome of the crags, from Oechalia home of Eurytus, came thirty hollow ships, commanded by Asclepius’ two sons, the skillful healers Podaleirius and Machaon” (Iliad II. 730) (1) 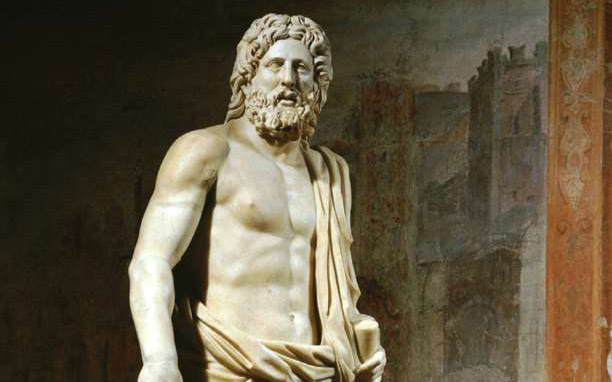 King Asclepius of Trikki at later periods he was elevated to a status of a god and he was worshiped by all Greeks as the god protector of medicine. It seems that Asclepius even though he probably lived at later periods around 13th century AD he continued the long Minyan tradition of excelling in sciences, wisdom, and knowledge. Today on the hill where the ancient citadel of Trikki once stood a medieval castle exists that was made by the Byzantine Emperor Justinian I around 6th century AD. The castle was refurbished numerous times in the coming centuries by the Byzantines first, the Serbs and later by the Ottomans. It has 3 main defensive perimeters and plenty of square towers.

Interestingly enough the people of modern-day Trikala have a similar story saying that the castle communicates through tunnels with the old church in Kalambaka! Local legend holds that the third inner defensive perimeter contains a secret opening placed deep inside of a well, which functioned as an escape route from the castle in times of hostilities. This opening was a tunnel burrowed under the perimeter wall and followed a northeasterly direction, crossing the southern slope of the hill of Prophet Elias, eventually leads all the way to the Byzantine church of “Virgin Mary” in Kalambaka. 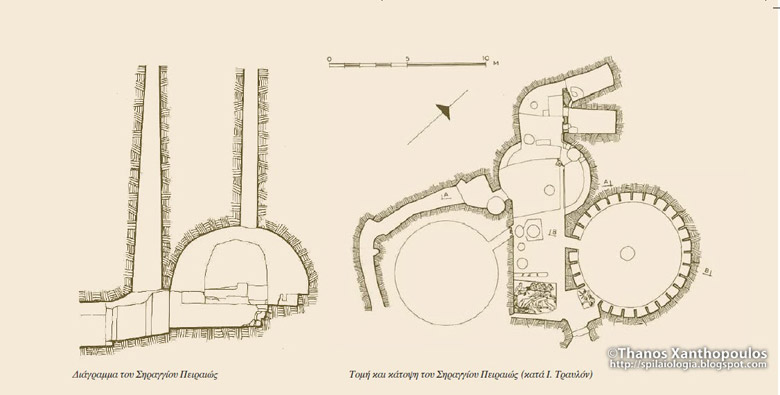 Rumors of tunnels beneath the Byzantine church of “Virgin Mary”

If you ever visit the Byzantine church in Kalabaka, you can find a small booklet they sell with the history of the church. The church’s booklet has a vague reference to the existence of an “underground place”. According to the booklet, a “deep crypt” was found inside the sanctuary a few decades ago during a survey of the church by a team of Greek archeologists. The entrance of that crypt was found hidden underneath a marble throne placed inside the sanctuary called “synthronon”. A very ancient feature of early-Christian churches which the paleochristian bishops used. The booklet specifies that the crypt was mainly used to hide the church’s valuable items, but it was big enough to be used also by the Christians in order to hide there!

So the crypt mentioned in the booklet, in reality, wasn’t just a small opening but rather it was a big enough place to accommodate numerous people. Could it be that the underground crypt those early Christians used was a small part of a vast ancient network of tunnels the Minyans made for whatever reason thousands of years ago? Today there is no other available information or concrete evidence except the clues I’ve posted above and frankly, the only thing we can do today is to mostly speculate.

The archeologists who surveyed the church back in the ’60s probably had a quick look inside of the newly discovered “crypt” and then they sealed it off without never publishing or saying anything of what they saw or found down there. Neither the priest of the church, who certainly knows a lot, seems to want to make any comments on the subject beyond the things we know already. In my view, the only proto-Greek culture that displayed the capacity and the know-how to undertake massive projects 5,000 years ago, like the ones that seem to exist underneath of the church and in the citadel of Trikala are the Minyans. It is up to the future archeologists to prove whether such underground constructions truly exist or not. And until that happens, the local legends and myths will continue to spread their faint memory.

Names of heroes and gods, preserved inside of our myths. Legends of a heroic past that stayed well hidden behind the thick mists of time and history. I guess such is the cycle in life for all things. And those who follow they will hear and learn one day the same legends and myths as we did before them. And some of them will dare to dream that their names too will be written next to those great heroes and kings of the past. And all of them will be mentioned in the whispers of immortal mountains and of the winds as they sing to each other the brave deeds of those few men who chose to stand in the dawn of time side by side with gods, fighting the Titans and building monuments for to withstand the wrath of time.