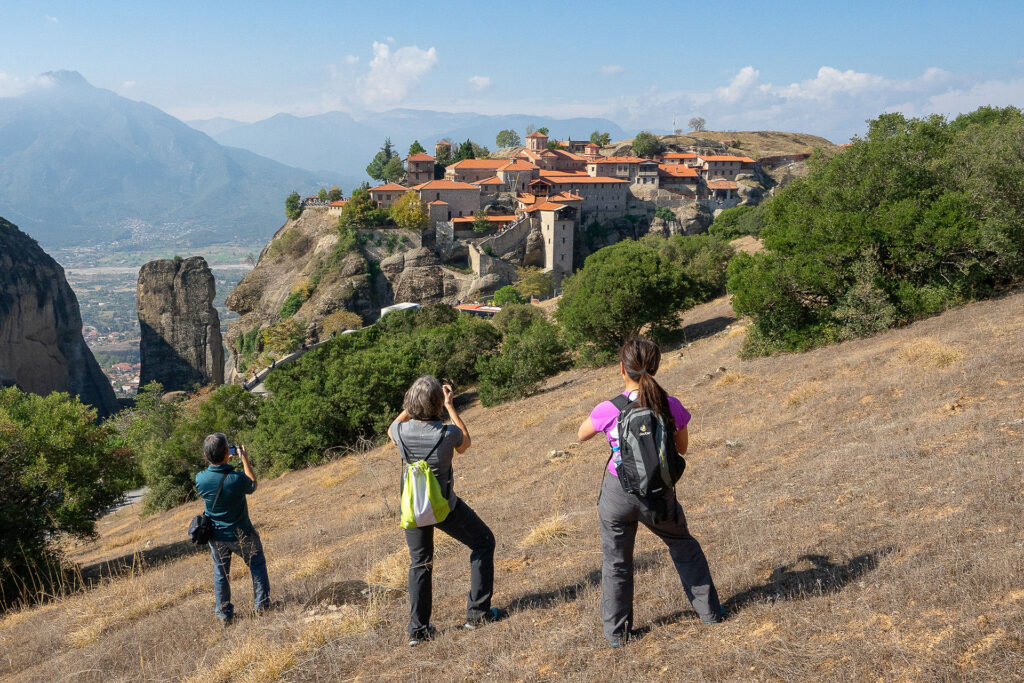 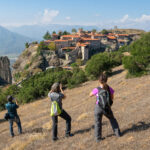 Today I had the pleasure of going on a spectacular day hike with a great group of old and new friends through the seldom visited region of Meteora, Greece. My time Athens had been fantastic but after the marvels of TBEX and new friends made it was time for a new journey. I’m not going to find freedom by getting fat eating Gyros in Athens now am I?

Meteora sits just outside the town of Kalampaka. If you want to visit the Meteora Monasteries you will most likely take the train from Athens to Kalampaka. The other option is the bus, but the train is far more comfortable and was the choice yours truly made to make my way to this hidden gem. Check the train times on the train website here. Have a look at the visitmeteora.travel website for more detailed info on bus and train schedules. I paid 39 euro for a return ticket with the plan to stay 3 nights in Kalampaka. I have been here for 2 nights already, I could easily stay more. 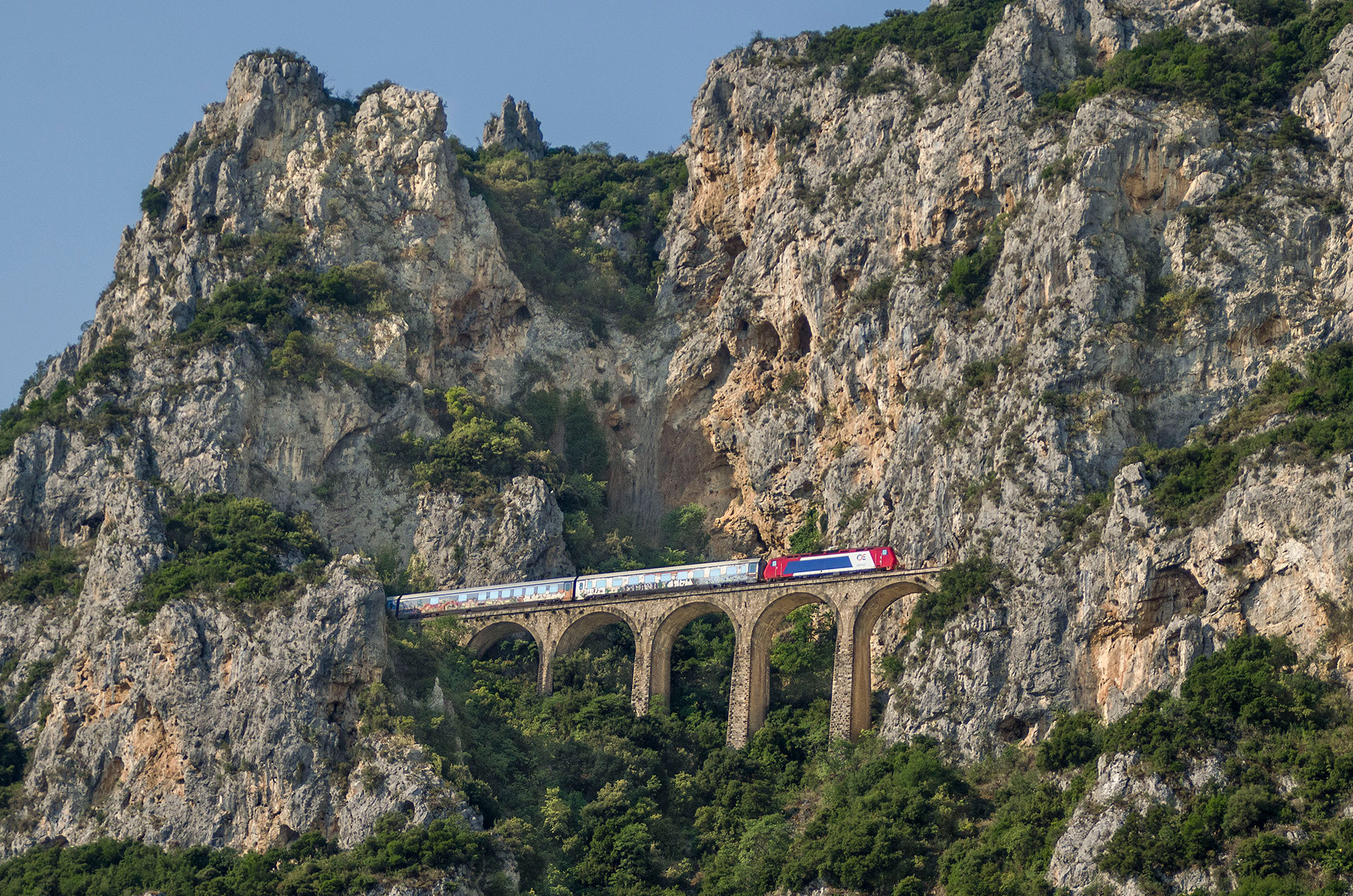 The van rolled up to my hotel this morning at 8:30 am sharp, the exact meeting time that our hosts had scheduled the night before. We all hopped in and away we went to the base of what would be a not too challenging day hike to see a series of epic Meteora Monasteries. When the group assembled we had the first glimpse of our 2 fantastic guides. These guys were really great and highly recommend. 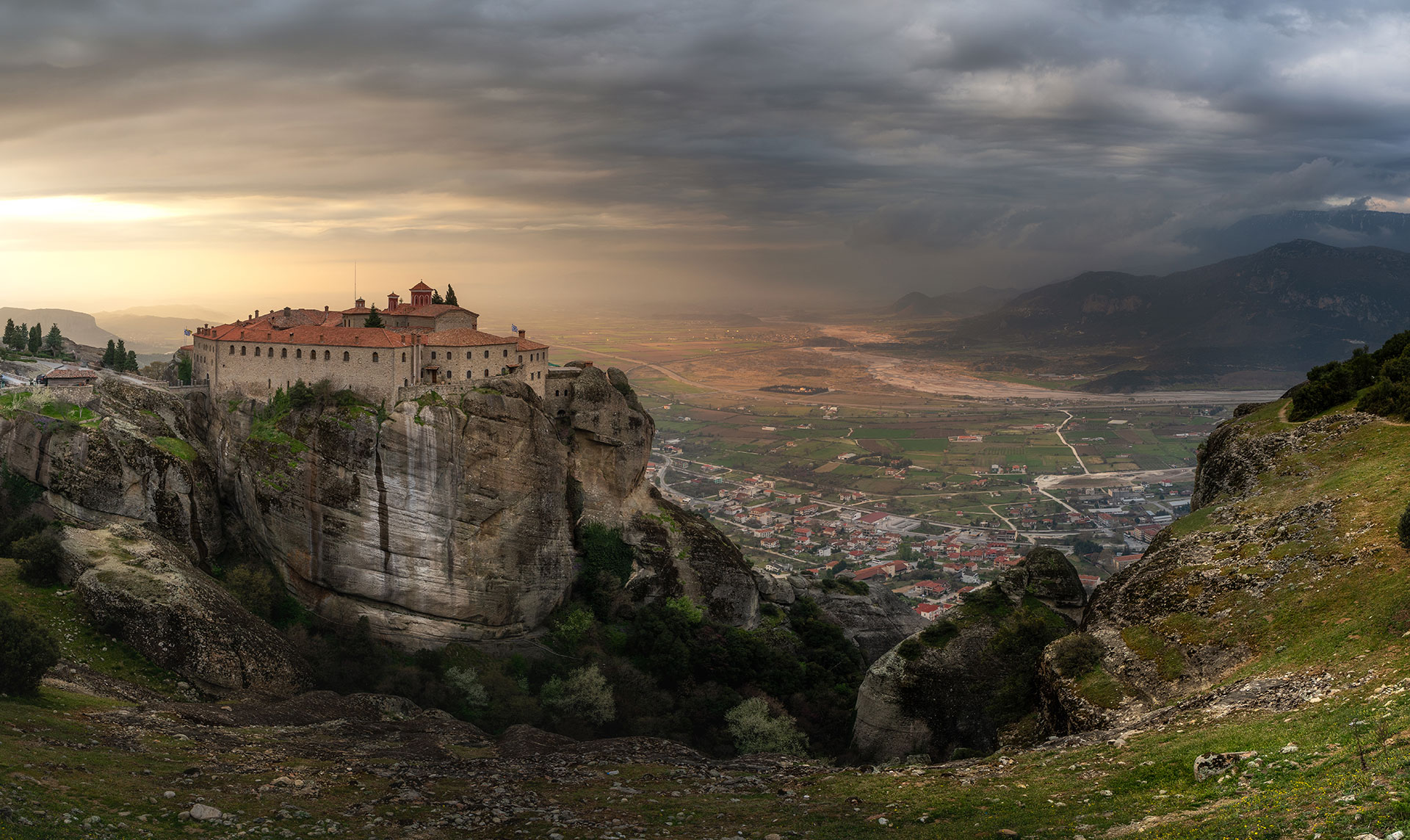 George – I never saw George without a smile on his face. Although it was dark and skies were grey, he still rocked a pair of aviators and I now I don’t think I could picture him any other way. He had a certain fire in step and was well versed in the history of the area and what life was like back in the day in the Meteora Monasteries. He would lead charge on this trip and I was in good hands. 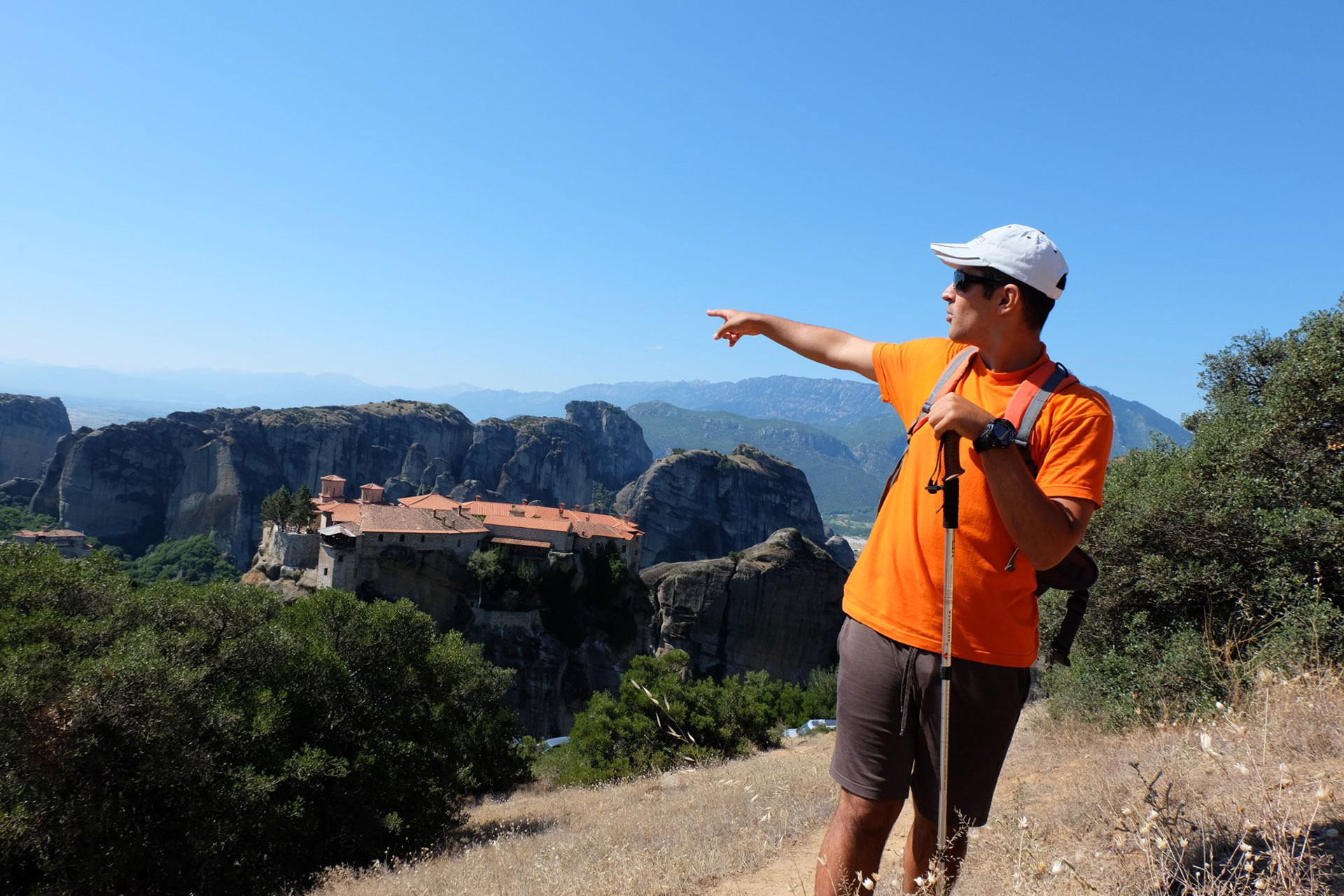 Lazaros – An outdoorsman through and through. His passion lay in rock climbing and I would have trusted him with my life. Basically, he was the Greek Bear Grylls. If I were to guess his second passion it would be mushrooms. The chance arose to walk with him for a while on our Meteora Monasteries mission. At a moment’s notice, he would suddenly stop, look at me with a grin ear to ear, and point out a mushroom. He would first say whether it was poisonous or not, if the latter fell true he would remove his special mushroom knife and cut it form the base, then use the attached mushroom brush to clean the dirt before dropping into a bag filled with his already foraged findings. 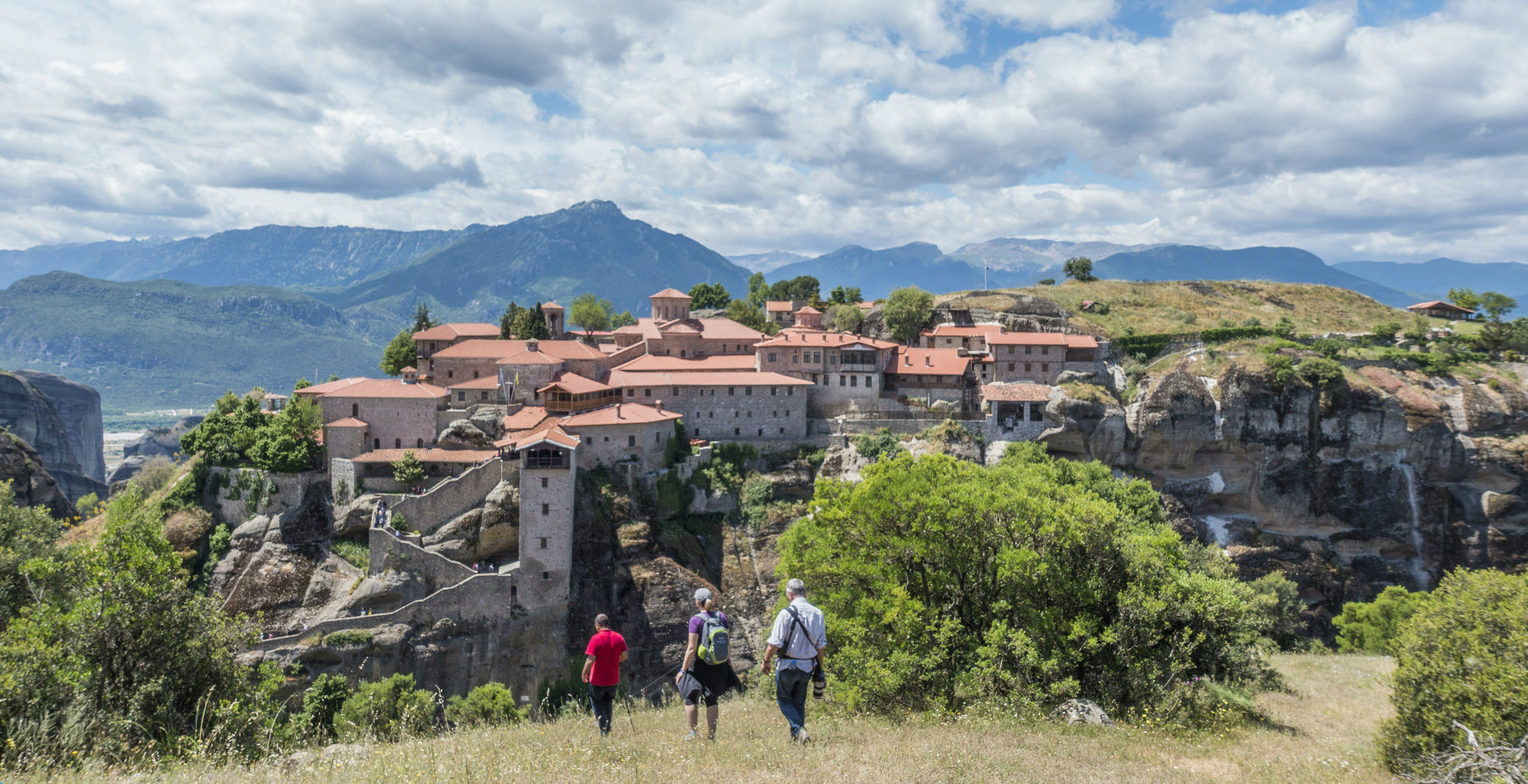 Hiking to the Great Meteora Monastery

After we had our briefing we hit the trail. The terrain wasn’t too intense and would be great for anyone and all abilities. Along the way, I didn’t find myself out of breath once, which surprised me after an extended time of inactivity. We passed many Meteora monasteries. At the peak of their existence, there were 24 in total, now 6 remain.

Meteora Monasteries were built atop massive rocks many meters tall. This was so the monks that lived within could hide the persecution they faced. These impressive structures took centuries to build. Monks would begin the building process and their prodigy would take over. This would continue until completion. Check out some more history of the Meteora Monasteries on the UNESCO site here. 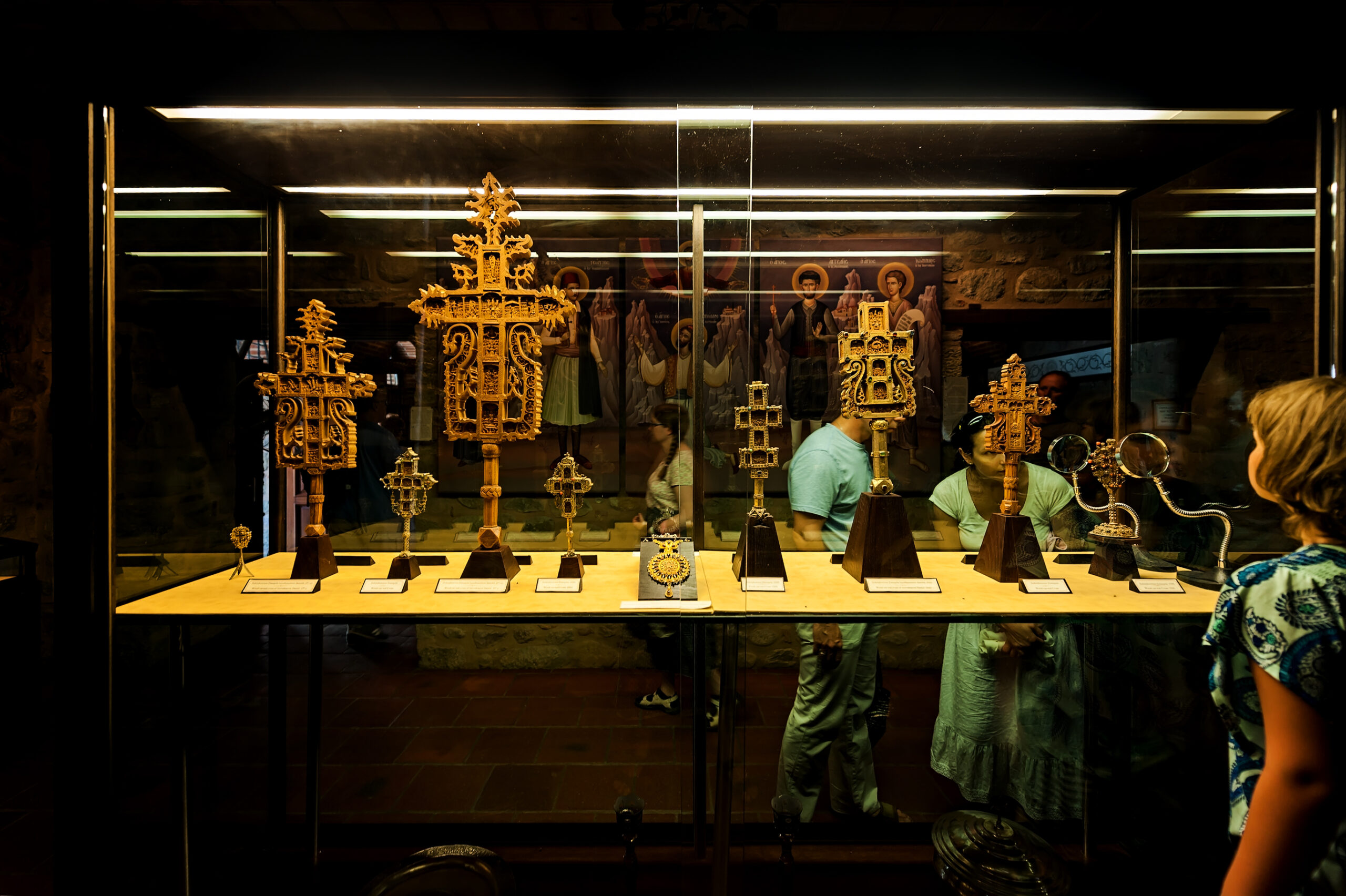 The pinnacle of all the Meteora Monasteries is the Great Meteora Monastery itself in all its glory. We arrived here after a brisk 9km stroll. This place was insane. We walked in through a rock tunnel and up a switchback staircase. Once inside I just marveled at what I saw. There were paintings and statues from the 1500s, old pottery and kitchen items that dated back centuries before, and a recreated wine room that left a thirst in my mouth. The views were unbelievable, but the highlight of all highlights was the old chapel. Unfortunately, cameras were not allowed inside but that just means you must bring yourself to the Great Meteora Monastery to marvel at its beauty in person.

You can read the complete article over at findingthefreedom.com!