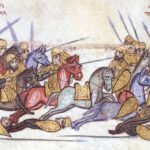 The ancient city of Byzantium

Byzantium or Byzantion was an ancient Greek colony founded in 667 BC by Dorian colonists who came from Megara, a city-state near Athens. The city of Byzantium, nowadays the Turkish city of Istanbul, took the name from the founder and leader of the expedition Byzas, son of Megara’s’ King Nisos. Byzas, upon sailing with his ships at the Golden Horn, found a great natural harbor where the Bosporus flows into the Sea of Marmara. He immediately recognized the advantages and the great strategic importance of this harbor, located on the European side of the Bosporus straits. The city he established many centuries later renamed Constantinople (330 AD) meant to become the capital of one of the most powerful empires in world history, the Byzantine Empire. 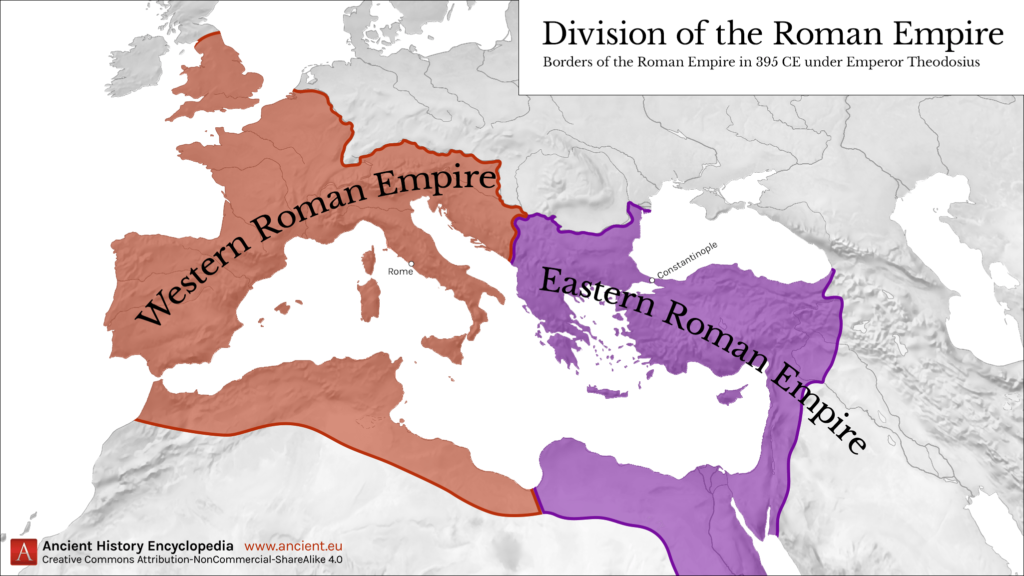 The genesis of a Medieval Hellenistic Empire

In the year 330 AD, the Roman Emperor Constantine the Great takes the decision to move the capital of the Roman Empire to this strategically important location of Bosporus, the city of Byzantium. The newly established imperial capital of the Roman world took the name Constantinople, known also as the “New Rome”. In the Greek language, the name “Constantinople” translates to “the city of Constantine”. The combination of Roman imperialism and location would affect Constantinople’s role as the nexus between the continents of Europe and Asia. It was a commercial, cultural, and diplomatic center of the Christian world for over 10 centuries.

With its strategic position, Constantinople controlled the major trade routes between Asia and Europe, as well as the passage from the Mediterranean Sea to the Black Sea. The new Roman capital was located much closer to the most vibrant and important population centers of the Empire, the Eastern provinces. Τhis allowed for a far better administration and swift military responses to any hostile incursions. The centuries-old dominant Greek language and the Hellenistic culture of the Eastern provinces allowed for a far stronger sense of unity between the various populations living in this Eastern part of the empire. 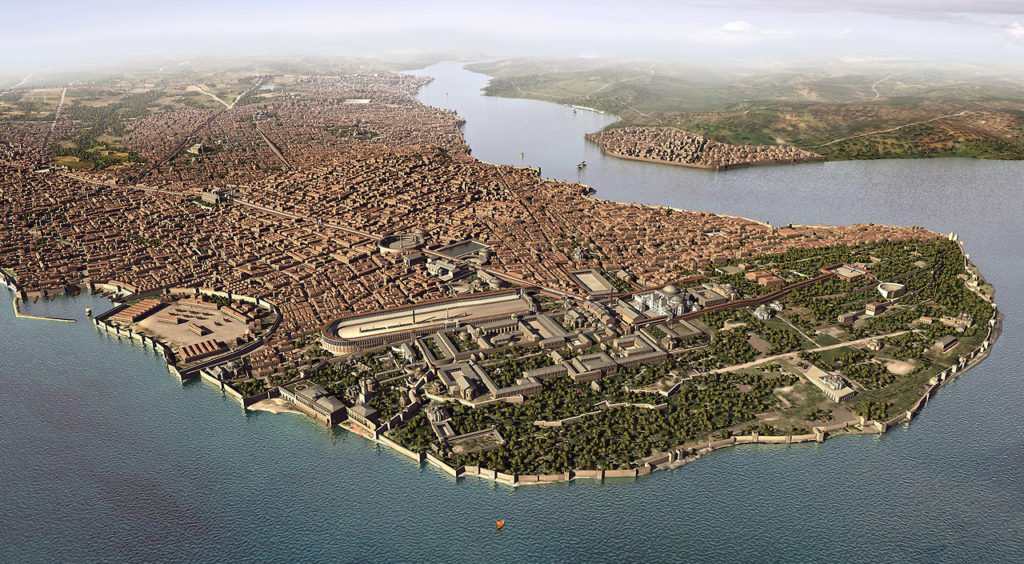 The Dark Ages and the Eastern Roman Empire

In the year 395 AD the Roman Empire was divided into the Western and the Eastern Roman Empires. Less than a century later, Rome fell to the invading Germanic tribes and the Western Roman Empire collapsed with it in 476 AD. For many, this marks the beginning of the Dark Ages in Europe. While the West plunges into a dark period of violence and unrest, in the East, the Eastern Roman Empire proved much more resilient and adaptive, managing to survive for another 10 centuries. Varied in size over the centuries, at one time or another, possessing territories located in Italy, Greece, the Balkans, Levant, Asia Minor, and North Africa.

An Orthodox Christian state with Greek as the official language, the Byzantines developed their own political systems, religious practices, art, and architecture, although significantly influenced by the Greco-Roman cultural tradition. The Byzantine Empire was the longest-lasting medieval power, and its influence continues today, especially in the religion, art, architecture, and law of many Western states, Eastern and Central Europe, and Russia.

The term “Byzantine Empire” or Byzantium which is used today to describe the Eastern Roman Empire was not used by the people of that period. For them, they were simply Roman citizens up until the very end and the Fall of Constantinople to the Ottomans in 1453 AD. The name Byzantium was adopted by modern Scholars much later to distinguish the ancient Roman Empire from the Eastern Roman Empire of the Middle Ages. And to do this they used the term Byzantion, the name of the ancient Greek colony existing before Constantinople was established as the new Roman capital. 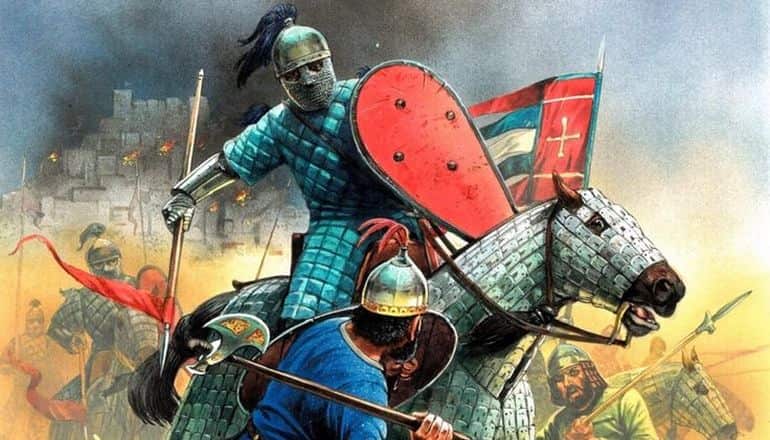 Defending Europe in the East from Islam’s expansion

Europe in the west borders to the Atlantic Ocean, so there was no real threat from that direction. The only invasion from an outside force Western Europe had to face during the upheaval of the Dark Ages was the Arabic conquest of Spain. The Arab advance from North Africa to Spain was eventually stopped by the Frankish forces under Charles Martel in West-central France with the battle of Tours or the battle of Poitiers (10 October 732). From this point on there was no other real threat Europe to face from that same direction.

That wasn’t the case for the Eastern Roman Empire, bordering with the landmass of Eurasia in the East, various European and Slavic nations invading from the East, North and West the Empire had to fight constantly for survival! And with each different nation, the Byzantine Empire was forced to fight they had to adapt its tactics to their different styles of waging war.

Nonetheless, the Byzantine Empire for centuries had the best army, utilizing the best tactics and weapons and led by the best commanding officers in the whole region. Between the 7th and 11th centuries Byzantium was trying to repel the Islamic expansion in the East. And even though it suffered huge territorial losses, eventually was able to halt their advancements in North Syria and Anatolia.

During that same period, the focus of the Byzantine Empire shifted from the western reconquests of Justinian to a primarily defensive posture especially against the Islamic armies on its most eastern borders. Without the danger of Islam and without the Byzantine interference in the emerging Christian states of western Europe, this relatively stable situation gave a huge stimulus to feudalism and economic self-sufficiency, paving the way for Western Europe’s resurgence from the Dark Ages.

The beginning of the end

By the end of the 1oth century, Europe’s various states became strong enough to set their eyes for expansion in the only direction possible: towards the East. The Empire from this point on was forced to engage in a struggle for survival on two different fronts, East and West.  In 1204 AD the Crusaders of the Fourth Crusade were assembled by Pope Innocent III, instead of reaching the Holy Lands they occupy and plunder the city of Constantinople. It was the first conquest of the imperial capital by an invading army since its establishment in 330 AD.

This alone, allowed the crusaders to plunder an enormous amount of wealth the city had accumulated over the centuries. The sack of Constantinople was followed by the fragmentation of the Byzantine Empire into three rump states centered in Nicaea, Trebizond, and Epirus. Latin forces manage to hold Constantinople up until 1261, the year in which the “Byzantine state of Nicaea”, expelled the Crusaders regaining the Empire to some extent. The Fourth Crusade is considered to have solidified the East-West Schism of 1054, dealing an irrevocable blow to the already weakened Byzantine Empire. This paved the way in the coming centuries for the Islamic conquests in Anatolia (modern-day Turkey) and the Balkans led by the Ottoman Turks. 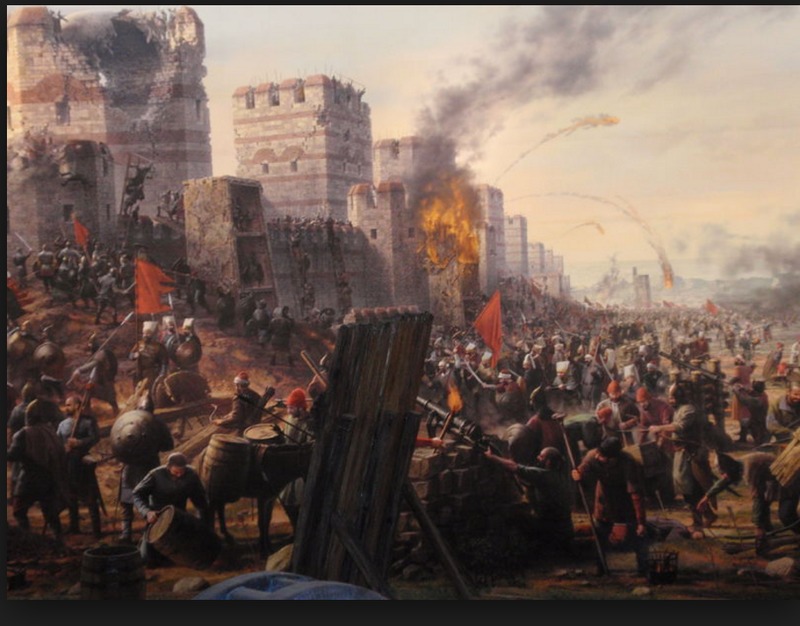 The Byzantine monasteries of Meteora

It was during this dark period of the 14th century when the first monks arrived at the area to establish the monasteries. Meteora at the time was under the rule of the Byzantine successor state of Epirus. To most people of that period, the demise of a thousand years old Empire seemed in their eyes as the pending end of their entire worldview. God was punishing them for becoming a degenerate state, filled with sinners who lived away from God’s will. For many of them, the last refuge they had was their Christian faith, to try to find God and to ask for forgiveness.

So, they decided to retreat away from this sinful world, in the deeply mystical life of the Eastern Orthodox monasteries. That’s why in the 14th century we see a surge of Byzantine people following Orthodox monasticism by joining monasteries and by becoming monks. They created eventually what became known as the movement of Hesychasm. And by doing so, the monasteries they established all over Greece became a living ark, preserving and safekeeping to this day the Byzantine traditions. Meteora became one of the most ideal places for the monks of that period to find refuge on the high cliffs. To be able to live completely detached from this world, suspended between the heavens and the earth, was a unique experience, one could find only at Meteora! 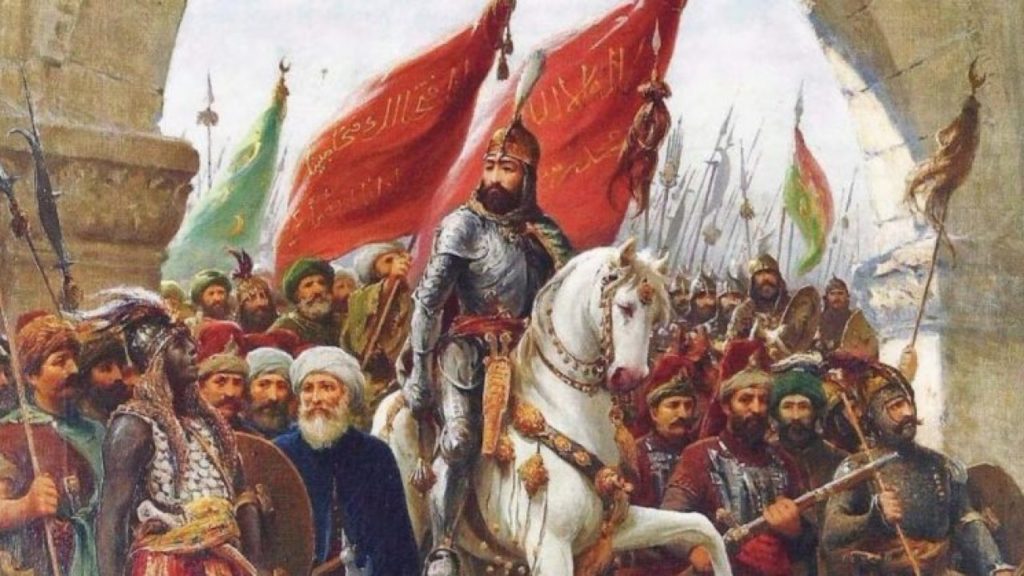 In the year 1453 AD, Constantinople fell to the Ottoman army led by Mehmed II, marking the end of the Byzantine Empire. During the dark period following the Islamic conquest, the Byzantine monasteries became beacons of hope, support, and knowledge for the Christians of the Orthodox Church. The monks managed to preserve the cultural wealth of Byzantium in their daily rituals, the art, the literature, and the parchments of their libraries, in the architecture of their churches. The Byzantine heritage remains alive everywhere inside the Orthodox monasteries today. By visiting a monastery of Meteora it’s like having a window back in time, allowing you to glimpse what once was the Imperial grandeur of Byzantium.

And the Byzantine Empire eventually became the longest-lasting empire in world history!